Government approval on COVID has been largely stable over July and August. The most notable exception is Vietnam, which saw a sharp drop from 93% to 76% at the beginning of August following an outbreak in the city of Da Nang. Even at this point the Vietnamese government still had the third highest approval rate of the countries our tracker covers, and favourable sentiment towards the government had bounced back to 89% two weeks later.

The lack of movement means that the usual suspects remain at the bottom of the table. The USA, France and Britain are all clustered in the doldrums, with net approval scores of -18, -17 and -16 respectively. The only other country still being tracked with a negative government approval rating is Spain, at -6.

Belief that the coronavirus situation is improving has slumped across the world as second waves start to take hold. Since June believe that the pandemic is easing off on a national level has fallen in 17 of the 22 countries we are tracking. Only India and Saudi Arabia are people substantially more likely to think things are getting better – and in Saudi Arabia that is just because the last time we reported the data was during the midst of their second wave.

Our outlook questions have been running since May, and we can now see trends developing from the data. As the chart below shows, public perceptions largely follow coronavirus case numbers. This relationship does not exist in India, Indonesia, the Philippines and Sweden, however, where perceptions have remained relatively flat even as case numbers surged. 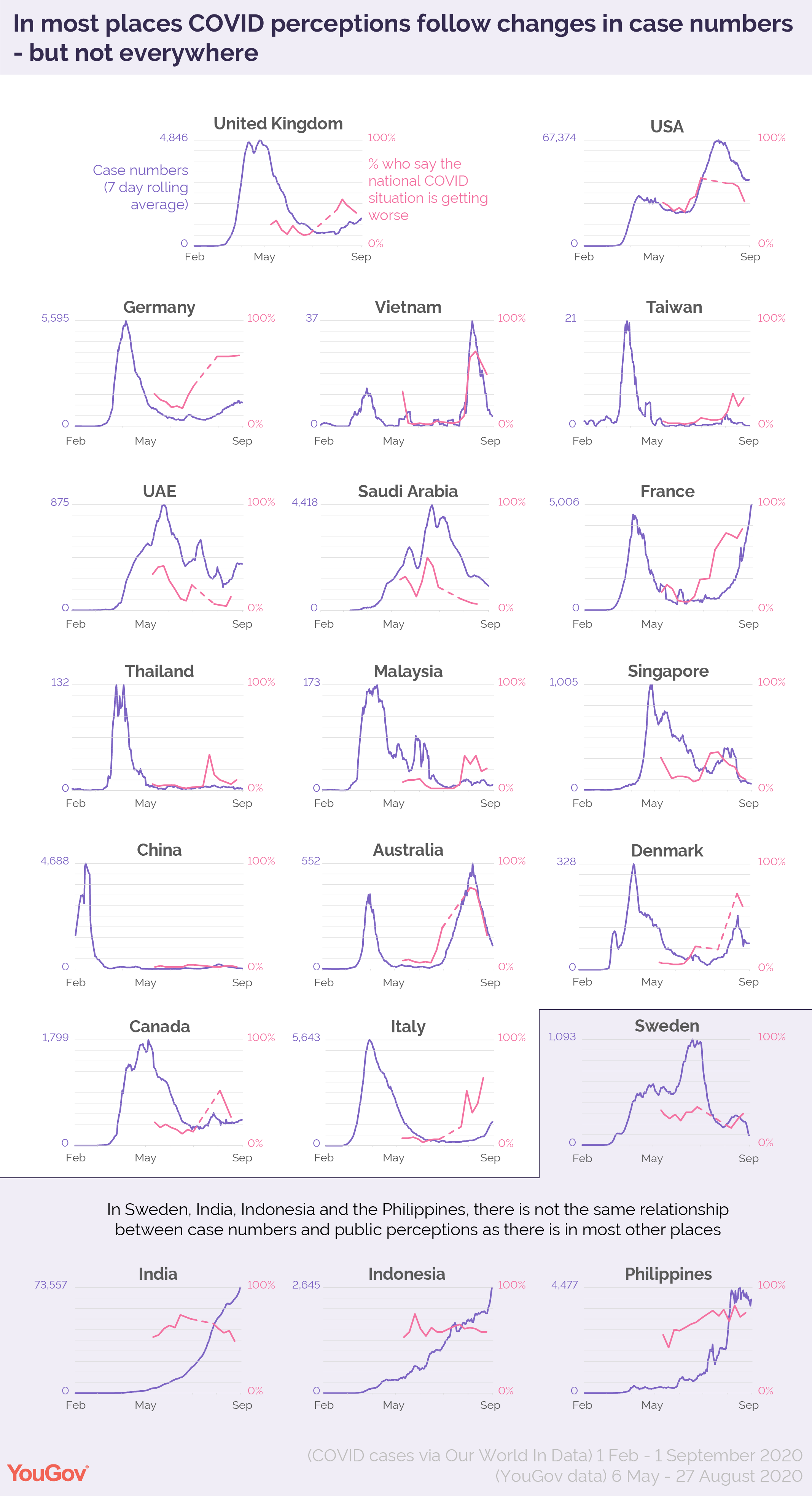 People’s opinion on whether the pandemic is improving or worsening globally follows the same trend as what they think is happening nationally, although generally at a more negative level. As a result of moods darkening in the majority of countries, respondents’ global outlook has become gloomier as well.

In a few countries people are more likely look out at the world and see the situation getting better than it is in their own nation. Indonesians, Filipinos and Americans are the most likely to feel this way.

See all of our outlook tracker data here

In most places protective behaviour has slackened off from peak levels, although in most cases it remains high. Most countries have seen double digits decreases in the proportion of people: avoiding public places; avoiding going to work; exercising improved personal hygiene; refraining from touching objects in public; and avoiding physical contact with tourists.

There is one exception: face mask usage. The wearing of protective facial coverings remains at or near peak levels in all countries still tracked. China has seen the largest decline, from a peak of 90% in April down 11 points to 79% (and even then, most of this decline took place during May).

See all our trackers for personal behaviour here

Likewise, although diminished from their peak, support for actions the government could take to tackle the spread of the virus remains high. Most people in most countries still support quarantining anyone who has come into contact with an infected person; providing free face masks; encouraging companies to have staff work from home; cancelling large sporting events and concerts; and quarantining international travellers.

See all our trackers on government actions here

Support for cancelling routine hospital appointments and procedures; closing schools; quarantining locations an infected person has been; and banning all flights are now only supported by the minority in most places.