Michelle Obama has supplanted Angelina Jolie as the world’s most admired woman, according to YouGov’s annual study of which public figures the people of our planet look up to.

In fact, the American actress, filmmaker and humanitarian has fallen from first place last year to third place this year, with US talk show host and philanthropist Oprah Winfrey coming second in the 2019 list.

Microsoft founder Bill Gates remains the world’s most admired man, having topped the list every time YouGov has conducted the survey. 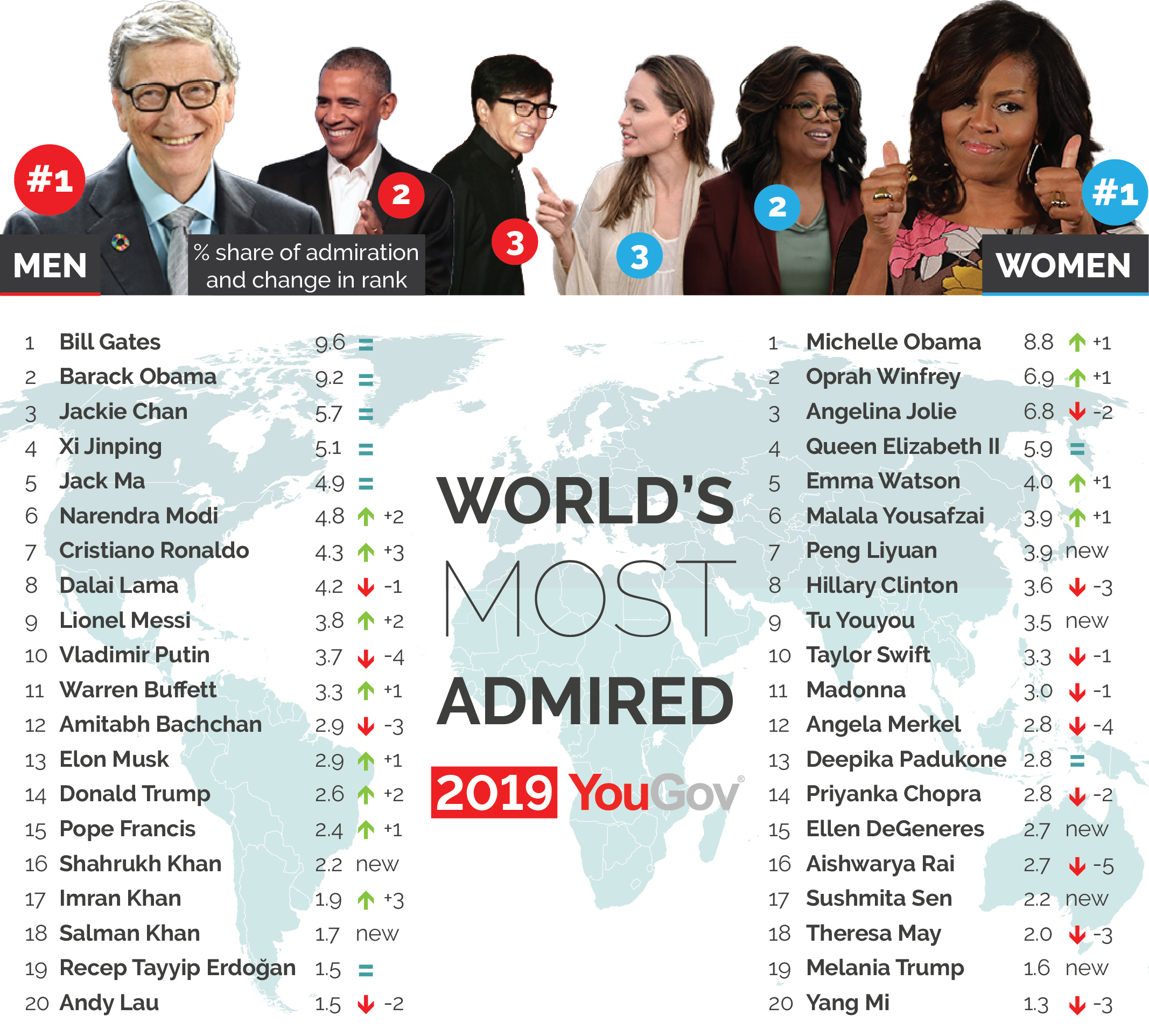 In fact, the whole top five men remain unchanged since last year. Former US president Barack Obama comes in second, and the third to fifth places are all occupied by Chinese figures: actor Jackie Chan in third, president Xi Jinping in fourth and businessman Jack Ma in fifth.

This year’s study expanded to cover the views of people in 41 countries – the most ever – with more than 42,000 people being interviewed to compile the list.

The top twenty most admired women sees five new faces this year. Two are married to the world leaders: Melania Trump and Chinese singer Peng Liyuan, who is the wife of president Xi Jinping. They are joined by Chinese scientist Tu Youyou, Indian actress Sushmita Sen and US talk show host Ellen DeGeneres.

Entertainers dominate the female list, with 12 of the most admired women being actresses, singers or TV presenters (although some, like Emma Watson and Angelina Jolie, are also notable for their humanitarian work). By contrast, the list of most admired men contains more people from political, business and sporting backgrounds.

Portuguese footballer Cristiano Ronaldo and Pakistani Prime Minister Imran Khan have climbed the highest up the tables since last year, both having risen three places to seventh place and seventeenth place respectively. Indian actress Aishwarya Rai has fallen the furthest, down five places to sixteenth.

In December YouGov gathered open-ended nominations from panellists across 41 countries, asking them simply: “Thinking about people alive in the world today, which [man or woman] do you most admire?” These nominations were then used to compile a list of the 20 men and 20 women who received the most nominations and were nominated in at least four countries. An additional 10 popular local figures were added to the lists for individual countries.

In fieldwork conducted from March to June we used these lists to poll each of the 41 countries asking two questions: “who do you truly admire?”, where respondents could make multiple selections, and “who do you MOST admire?”, where they could only pick one. These two numbers were combined into a percentage share of admiration, displayed to the right of each name in the graphic above and table below, which shows the full results for every country including local celebrities and public figures:

Choose a country to see the most admired people worldwide

By asking respondents two questions, we can understand both the breadth (i.e. global reach) and the intensity of a person's support.

Altogether, we polled in countries that constitute more than two-thirds of the world's population. However, some parts of the world were better represented than others, so we weighted up the impact certain countries had on the final scores and weighted down others so the global scores more accurately reflect the breakdown of sentiment in the world overall.