During an interview with The Times and Bild last week, Donald Trump caused consternation in many western governments by declaring NATO to be "obsolete". The military alliance has underpinned security in Western Europe for more than half a century and, with an increasingly aggressive Russia, the protection that the alliance provides could be more important than it has been in decades.

However, the new president's negative view of NATO is not shared by other members of his administration. New defense secretary James Mattis – a former general – told the US Senate that "NATO is vital to our interests" and spent his first day in office reassuring European allies that the United States continues to have an "unshakeable" commitment to NATO.

British prime minister Theresa May today becomes the first foreign leader to meet President Trump and shoring up support for the alliance will be high on her agenda.

New data from this month’s YouGov Eurotrack survey, coupled with equivalent data from the US, finds that Americans are far less likely than Europeans to believe that NATO is still relevant. However, three times as many Americans still believe the alliance is important as think it to be obsolete. 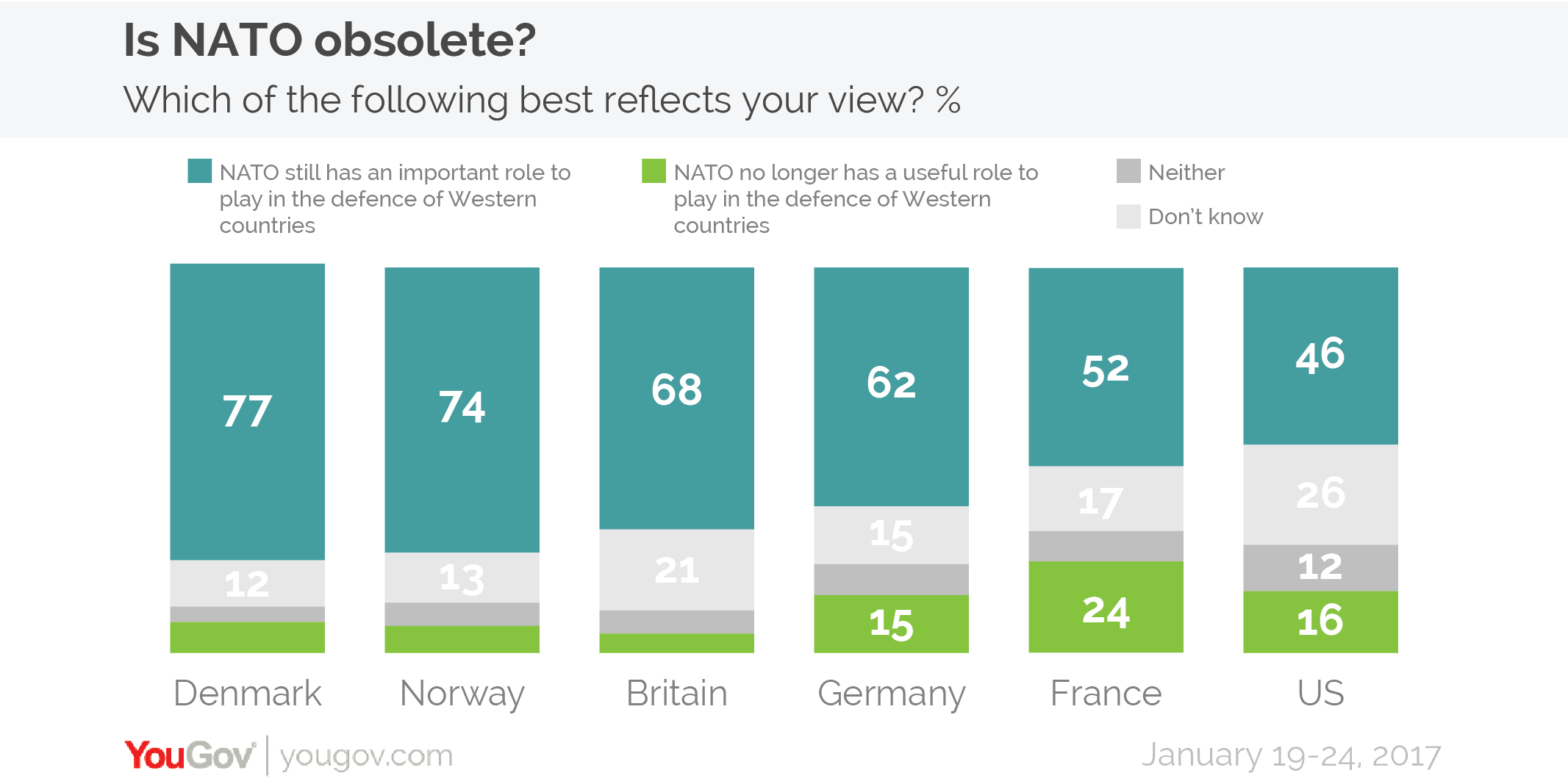 The public in Nordic NATO members Denmark and Norway are the most likely to think NATO still has an important role to play in the defence of Western countries, at 77% and 74% respectively. Europe's great powers also strongly believe in the continued relevance of the alliance. More than two thirds (68%) of Brits and 62% of Germans think NATO is still important, whilst support among the French – whose country previously left and rejoined the organisation – sits lower at 52%.

In the US, by contrast, just 46% of people think that NATO is still important – although only 16% of Americans think it no longer has a useful role to play.

Americans are similarly lagging in their support of their country’s continued NATO membership. Whilst support for their own country’s involvement in the organisation is as high as 68-80% among the European nations, in the United States it stands at 47%.

Republicans and independents are far less supportive of US involvement in NATO than their Democratic counterparts. Two thirds of Democrats (66%) support America's NATO membership, compared to just 37% of independents and 39% of Republicans.

The survey also found that the people of Sweden and Finland – both touted as potential NATO members – were more likely to support joining the alliance than to oppose entering it (39% vs 28% in the case of Sweden, 39% vs 33% for Finland). 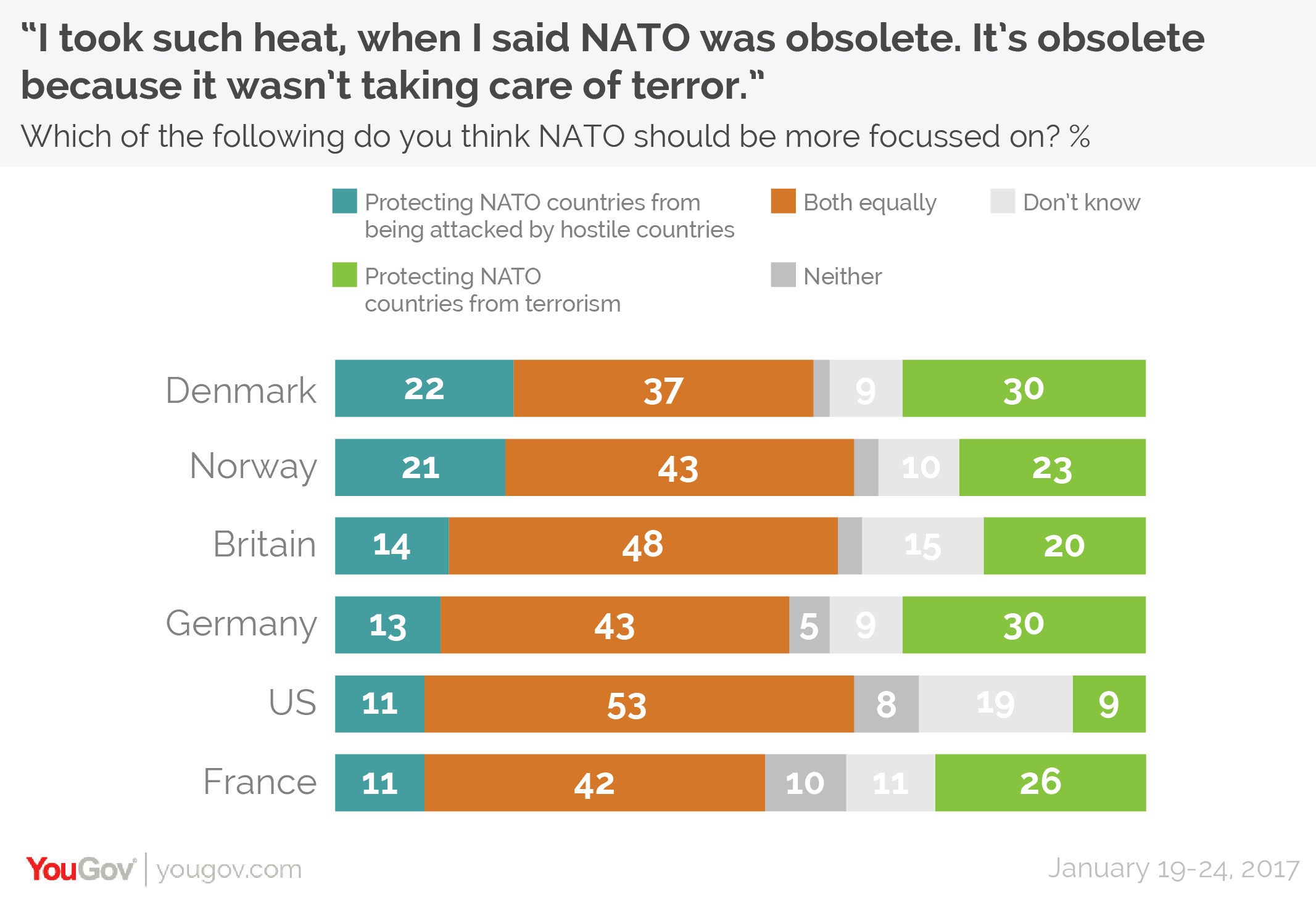 One of the reasons that Trump gave for his belief in NATO’s obsolescence was that it wasn’t "taking care of terror". On this point, people across the West agree with the new president. Asked what NATO’s main focus should be, the largest proportion of people in each country answered protecting member countries from both invasion and terrorism equally.

Only 11-22% of people across the continents thought that NATO’s current focus should remain primarily on mutual defence against attack from hostile countries – a lower proportion in each case than the 20-30% who thought NATO should focus most on fighting terror.

Americans might be more isolationist, but they don’t feel isolated from threat

Despite their comparative lack of enthusiasm for the military alliance, Americans are much more likely than Europeans to feel threatened by other potential adversaries.

Asked to rate how threatening they found various potential enemy nations on a scale of 0-10, nearly a quarter (24%) of Americans gave Russia and Iran the most serious threat rating of 10. This rose to 29% for North Korea, whilst China was seen as the least threatening country on the list with 16% giving it a threat rating of 10.

Fortunately for the continued credibility of the alliance, people across NATO countries are much more likely to believe that NATO could beat Russia in an armed conflict than the reverse (although high levels of people say they are unsure what the outcome of such a fight would be).

But should the US have to protect Europe if Russian tanks started rolling west? While fewer than half (46%) of Americans believe the US has a responsibility to protect Europe, this is still higher than the proportion that think the US has no such obligation (30%). 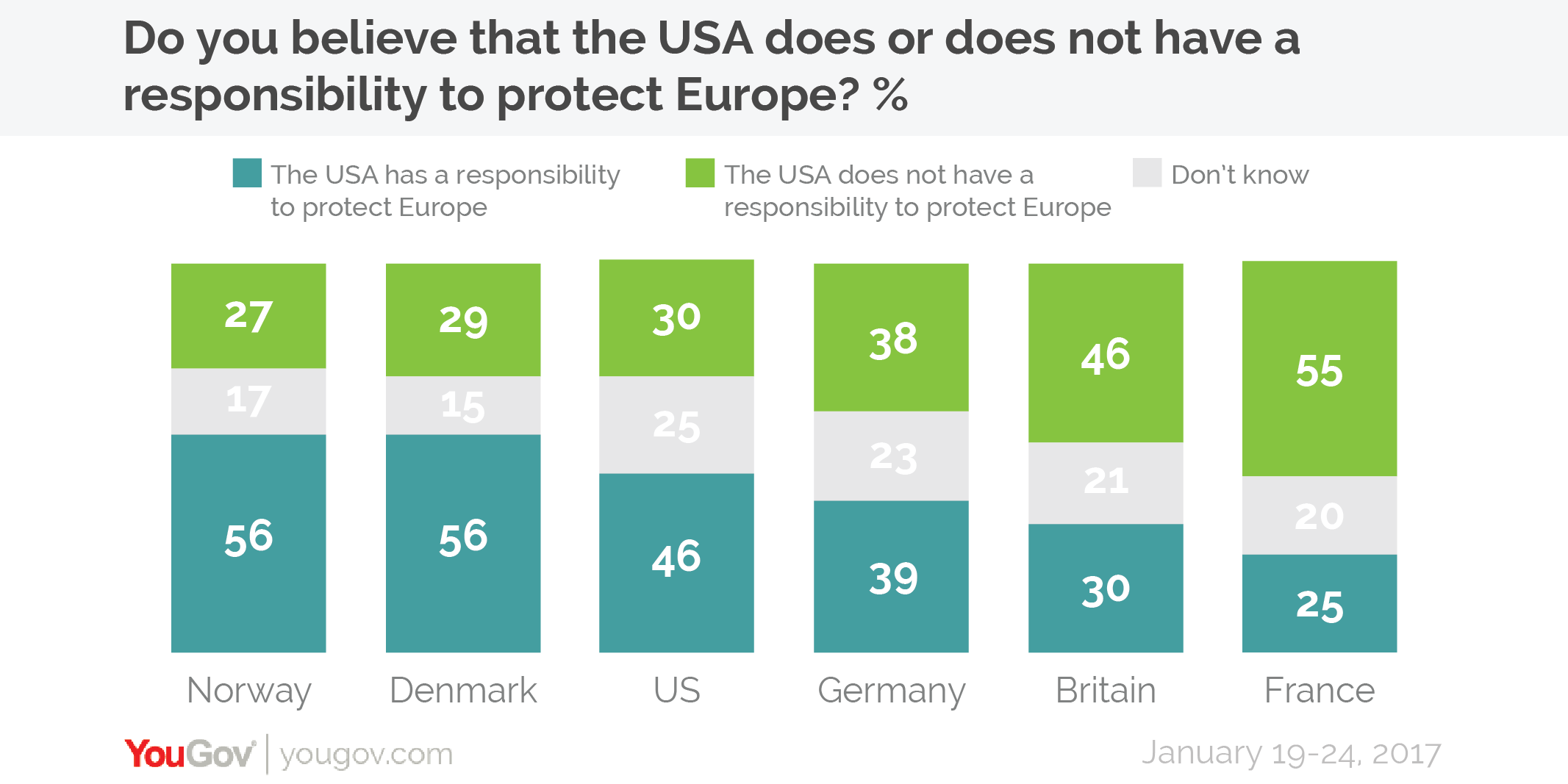 By contrast, Europe's great powers are far less likely to hold the US responsible for ensuring the continent's safety. The majority of French people (55%) do not think the US has a duty to defend Europe, as do a plurality of 46% of Brits. The Germans are almost evenly split on 39%/38%.

See the detailed US results here