The race is now exactly tied across 13 states likely to decide the presidential election in November, according to the latest wave of the YouGov/CBS News 2016 Battleground Tracker.

Democrat Hillary Clinton and Republican Donald Trump both win 42% support among likely voters in the latest poll. This suggests minimal change to the race compared to last week, before Clinton’s unexpected hiatus from the campaign trail due to pneumonia, when she led Trump by one point. Overall, 53% of voters tend to think Clinton’s pneumonia diagnosis raises larger questions about her health, but, at the same time, 52% believe the event was blown out of proportion. 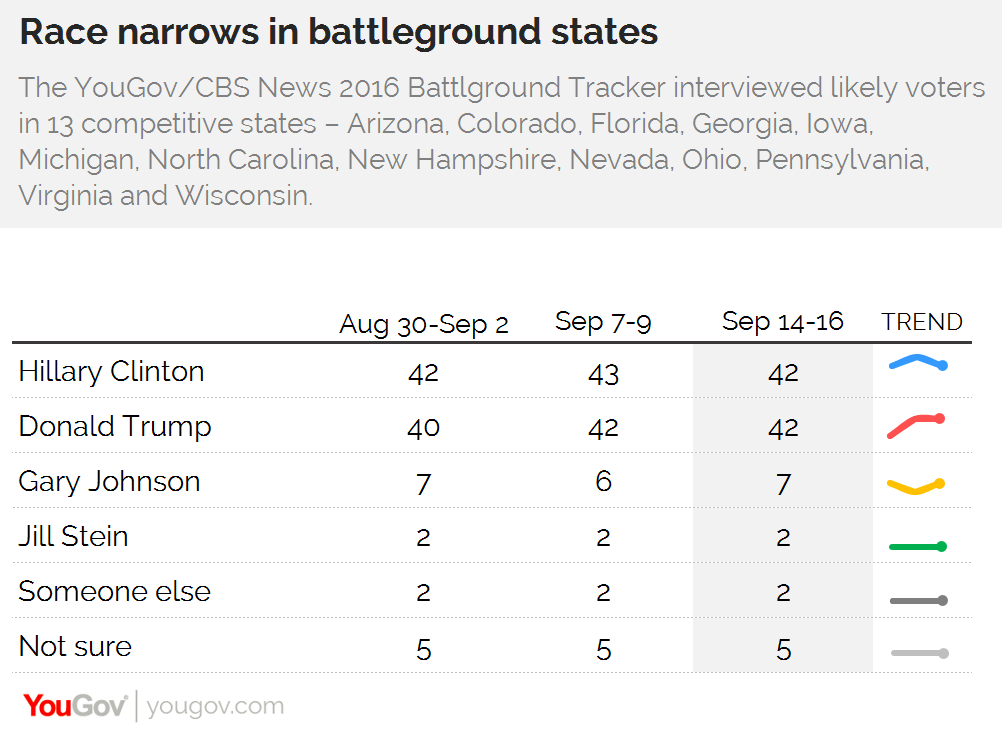 At 7% support, Libertarian Gary Johnson has yet to fade from the race, but has not improved his position over the past two weeks. Similarly, Jill Stein has been stuck at 2% over the same period. Neither Stein nor Johnson made the polling cutoff to participate in the first presidential debate, which takes place next week.

For the battleground sample, 13 competitive states are polled as a group. In 2012, Barack Obama won all but three of the states – North Carolina, Georgia and Arizona – but won the popular vote by only two points, taking 50% to Mitt Romney’s 48%. Nevertheless, the poll suggests Trump has improved his standing in battleground states over the past two weeks, consistent with a narrowing of Clinton’s lead in national polls.

Voters continue to see the presidential race as a match-up between an agent of change, in Trump, and a capable manager, in Clinton. By 47% to 39% Clinton is trusted over Trump to “handle the job of president well, day-to-day”, and voters are more likely to say she is prepared to be Commander-in-Chief. On the other hand, Trump is seen as more likely to “change Washington” by 47% to 20%.

The latter set of numbers could be seen as a good sign for Trump given that, in the same poll, 55% of voters expressed a desire for “big changes” in the country’s politics and economy. However, only 35% of voters believe that, if Trump were to become president, “the country would change, and be in better shape than ever”. 16% don’t expect any significant change and 49% worry the country would be “damaged beyond repair” if Trump becomes president. With Clinton, fewer are optimistic about positive change (22%) or concerned about negative change (46%).

Interviews were conducted September 14-16, 2016 for the CBS News 2016 Battleground Tracker. A detailed description of the methodology used to carry out the surveys can be found here.