Today's YouGov poll for The Times, with a two point lead for Leave, is within the margin of error of the last poll published in The Sunday Times, which showed a one point lead for Remain.

For those trying to identify momentum, to tell "the story" of the campaign, it must be frustrating: having recorded a surge towards Brexit, we now show the campaigns roughly neck and neck again, where they have been for most of the past three months.

So what is the story? Let's start with some narratives that you will hear but that are not borne out by the evidence.

First, the idea suggested by Nigel Farage on Sunday – that "we did have momentum until the terrible tragedy" [of Jo Cox’s murder] – does not appear to be true.

This morning YouGov released results of a model developed by our chief scientist, Professor Doug Rivers, together with Benjamin Lauderdale of the LSE, which computes our daily data from voters.

It suggests that the surge towards Brexit was building throughout the second week of June, building to a "peak Brexit" moment on June 12-13 (one week ago, when the last Times survey showed a seven point lead for Leave), and was already starting to come back down again by the Monday before Jo Cox was attacked.

The data stops at teatime on Sunday, before the prime minister’s performance on Question Time – we’ll be publishing updates to the model before Thursday’s vote. 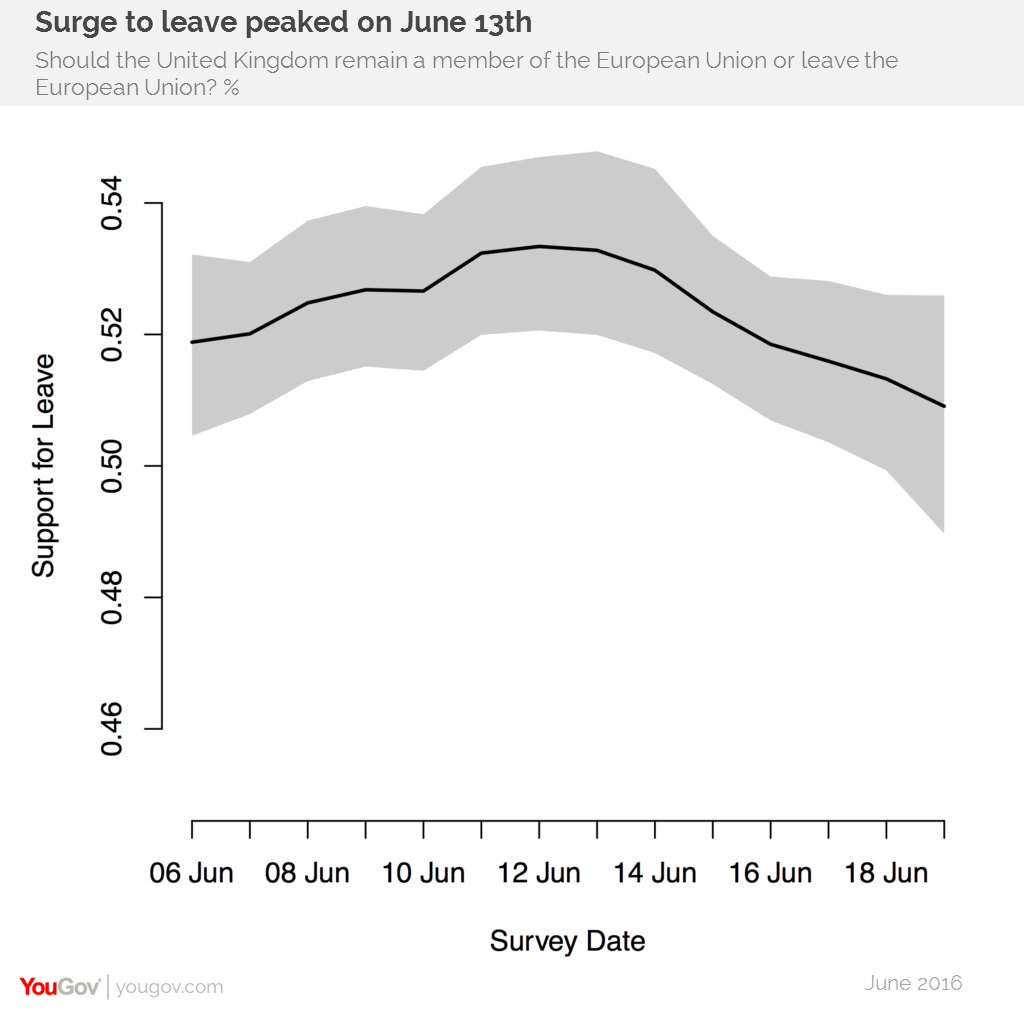 Second, despite similarities, this campaign is not simply the Scottish referendum all over again.

Many political observers, asked to predict Thursday’s vote tally, will venture 55-45 in favour of Remain, perhaps because that’s what happened in Scotland.

At YouGov we have also long been expecting a movement to safety in the final days, which is what we saw in Scotland in the two weeks before the vote.

The already-recorded movement back towards Remain is evidence that it is happening, and it could move dramatically further on the day.

But this time it may still not be enough. The starting point is different – we never showed leads of seven points for the Scottish Yes campaign – and there appears to be less fear.

Only 27 per cent of people in today's poll think they will be financially worse off in the event of Brexit, compared with 42 per cent of Scots before the Independence referendum.

The EU is an altogether more distant, abstract, recent concept than the UK, and life outside it feels like less of a scary change.

But should these be treated as "soft" Leave voters? When you ask them straight up if they might change their minds on the day, only a tiny percentage think that they will. We'd expect some more movement towards the safer option, but there is no evidence that it will be as dramatic as in Scotland.

Third, it is not a "done deal". The way the financial and betting markets have reacted you would think Remain had already won – yesterday's one day rally in the pound was the biggest for seven years, and the odds of Brexit on Betfair hit 5-1. But it's hard to justify those odds using the actual data.

You could argue that the defining characteristic of this referendum is precisely its refusal to follow a simple narrative.

When you hold a vote on a question that feels technical more than visceral for most people, particularly when it cuts across society in new ways and doesn't simply correlate with people's established views, we should not be surprised that people’s choices are volatile.

Many are genuinely confused by competing claims and we have seen people change their minds within a single survey.

Whatever the result, there will be a temptation to think, in retrospect, that 'twas ever thus, and all the nerves and drama of the campaign were somehow a distraction from the inevitable result.

That misconception still lingers about the Scottish referendum.

In two days’ time, YouGov will be conducting an on-the-day recontact survey to measure final movements on the day itself. Until then, the evidence suggests that we are in the final stages of a genuinely close and dynamic race.

This piece originally appeared on The Times Red Box website