Hillary Clinton and Donald Trump are both widely disliked and distrusted, though Clinton is viewed as more prepared for the job of president

Donald Trump and Hillary Clinton share a great deal when it comes to the public’s assessment of them – and it’s not just their unfavorable ratings.  In the latest Economist/YouGov Poll the image most American have of the two likely presidential nominees is similar when it comes to them personally – but much different when it comes to evaluating each person’s ability to do the job. 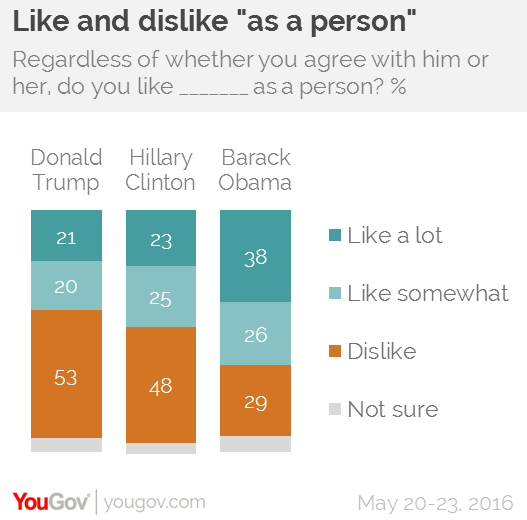 As has been noted many times, both Clinton and Trump are generally disliked: 54% of Americans have an unfavorable view of Clinton, though even more – 61% – are unfavorable towards Trump.  But among their own party’s voters they are seen favorably: 68% of Democratic voters have a favorable impression of Clinton, 74% of Republican primary voters like Trump.

There are other negatives the public sees when it comes to the character of each of these candidates.  57% think Clinton and Trump are not honest and trustworthy.  That weakness has been noted before, but this poll points out even more negatives:

On the positive side, they are both seen as strong leaders – and by the same margins.  58% call Clinton a strong leader; 57% say Trump is.  About three in ten think each is a “very strong” leader.

Trump has an advantage on authenticity, though there are as many who doubt him as think he really means what he says.  The public is as likely to believe he says what he really believes as to think he doesn’t.  On the other hand, they see Clinton as pandering to voters.

But Trump is no match for Clinton is a number of areas that can be described as “presidential.”  More people see Clinton as being able to deal with an international crisis (although one in five as yet have no opinion about Trump on this).  Far more see her as ready to serve as Commander-in-Chief than see Trump that way.  And she has a 21-point lead when it comes to just being viewed as “qualified” for the job.

About one in four Republican primary voters are dubious about Trump’s readiness.

In the poll, Clinton and Trump are running neck and neck when matched against each other in a November test ballot.  In part, this is because only half of Democratic voters who currently favor Vermont Sen. Bernie Sanders now say they will vote for Clinton in the fall. Trump fares slightly better among his own partisans: he now has the support of 60% of Republican primary voters who didn’t favor him in the primaries or caucuses, but wanted another candidate. 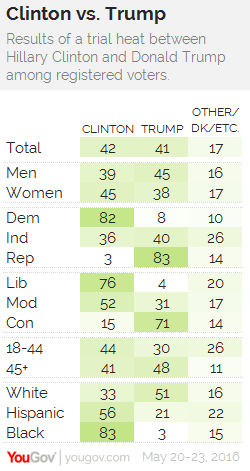 The preference distribution in this contests mirrors what has been seen in recent general elections.  Clinton runs ahead of voters under 45 years old, while Trump is ahead with those 45 or older.  Women give Clinton a seven-point lead; men favor Trump by six points.  Liberals and conservatives divide as expected. Self-identified moderates support Clinton by more than 20 points; Trump narrowly leads with independents (though more than one in four of them say they have yet to make up their mind).

Trump is ahead among white voters; Clinton is far ahead among Hispanics and African-Americans.

Of course, these are early distributions of preference.  With more than five months to go, much can – and will – change.

The negative assessments of both Clinton and Trump have brought about a significant undercurrent of negative voting – many admit they are casting a vote that is more against the opponent than for the candidate they currently support.  In fact, about one in three voters who support each candidate say they are mostly voting against the other party’s candidate.