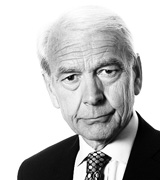 John Humphrys is presenter of the Today programme on Radio 4 and Mastermind on BBC1. He has won many national journalism awards and written seven books.

With the local elections out of the way British politics is now firmly focused on the Europe referendum.

The polls suggest the result could be tight so in the remaining six weeks of the campaign both sides will be throwing everything at it. Over the weekend, George Osborne and Michael Gove clashed sharply on the economic arguments. But now the Prime Minister has pitched his case on an altogether more fundamental level. In a major speech he has implied that if Britain were to leave the European Union, peace and security in Europe could be threatened. Does his case stand up? And, if so, should he have taken such a risk with European security by holding a referendum in the first place?

The Prime Minister himself did not, of course, put it quite so bluntly. But it seems fair to assume that the headlines captured the essence of the message he wanted to get across.

What Mr Cameron actually said was that the European had ‘helped reconcile’ nations in Europe that previously had been ‘at each others’ throats’. He said that British isolationism, or ‘turning its back’ has ‘never served this country well’. He looked back to history and compared 2016 to the great moments of English and later British involvement in European affairs such as the defeat of the Spanish Armada in 1588, victory at Blenheim in 1704 and the final defeat of Napoleon at Waterloo in 1815, as well as the sacrifices made for European and world peace in the two world wars.

The Prime Minister said: ‘Can we be sure that peace and stability on our continent are assured beyond any shadow of doubt? Is that a risk worth taking? I would never be so rash as to make that assumption.’

Given that the context of his speech is the battle being fought over whether or not Britain should remain in the European Union it seems reasonable to interpret these words as meaning: ‘Britain leaving the EU would risk peace and stability in Europe and that is not a risk worth taking’.

His speech came on the back of a spat between former bosses of Britain’s security services about whether or not Brexit would threaten Britain’s own security. Sir John Sawers, the ex-head of MI6 and Lord Evans, who used to be in charge of MI5, wrote at the weekend that leaving the EU would make Britain ‘less safe’. Sir John argued that it would shut Britain out of decisions on ‘crucial’ issues such as data-sharing, vital in counter-terrorism and defence against cyber attacks. But another former head of MI6, Sir Richard Dearlove, argued that membership of the EU has harmful effects on our security, in part because of the actions of the European Court of Justice. Michael Gove, the Justice Secretary and a leading figure in the Vote Leave campaign, argues that the ECJ makes it harder for us to share security data with our American allies and obstructs our ability to deport foreign nationals who may be a threat to security.

But the Prime Minister’s case is altogether wider. He is arguing not just that Britain would be less safe if we left the EU but that the peace and stability of the whole European continent would be threatened. In the eyes of many of those who want Britain to leave, this argument seems preposterous.

In the first place, they argue, both British and European security are guaranteed by NATO not the EU. No one is proposing, they argue, that Britain should leave NATO or that NATO should break up. But they do see the EU as a potential threat to NATO because of its own pretensions to create an EU-wide defence and security policy that might ultimately seek to usurp NATO’s role. Recent suggestions by the German government that there should be greater cooperation between the armed forces of member states – dubbed by the press as the embryo of an EU army – have been cited as evidence.

Furthermore, many opponents of British EU membership regard the EU, far from being a guarantor of European peace and security as itself a threat to continental stability. Their argument is that mounting tensions between member states, especially those within the eurozone but also over the migration crisis, risk setting them at each others’ throats in a way that the EU will not be able to contain. They point out too that within members states resistance to EU-imposed policies is already fuelling extremist political forces on the right and left of politics and is leading to a resurgence of anti-EU nationalism within those states. These EU-created trends are what threaten European peace, they argue, not British withdrawal.

But defenders of the Prime Minister’s case argue that whilst these threats to European security may well exist, containing them requires Britain to remain in the EU. Their point is that if Britain were to leave the EU, other countries would feel encouraged to follow suit. The whole EU project might then unravel returning the continent to the condition of feuding nation states the EU was created to end.

Furthermore, they argue, there would be a knock-on effect on NATO. It would be much harder to hold NATO together if so many of its members were breaking apart from each other in the EU. They add that it is notable that the senior partner in NATO, the USA, is so keen for Britain to stay in the EU. That President Obama should have been prepared to be so outspoken in his support of British membership is an indicator that he must agree with David Cameron on the importance of British membership to European security, they suggest.

The Prime Minister’s critics, however, think he is over-egging his case in order to frighten people into voting to stay in. He can’t really mean what he is implying, they say, because if the risks involved in leaving are as dire as he claims, then it was surely irresponsible of him to call the referendum in the first place. Or to put it another way: only a few weeks ago he was saying he ‘ruled nothing out’ (meaning he might be prepared to advocate British withdrawal from the EU) if he didn’t get a few changes to EU rules governing welfare payments to EU migrants and some guarantees that the eurozone wouldn’t gang up on non-eurozone countries like Britain. In other words, say his critics, was he really prepared to risk European peace and stability for the sake of what they see as some meagre changes to Britain’s terms of membership? Either his whole renegotiation effort was a charade (because the bigger context of European security was what really mattered to him) or he doesn’t mean it now when he says British withdrawal threatens that security.

What’s your view? Do you agree with the Prime Minister or not when he implies that Brexit threatens peace on the continent? Do you think he means it or is just saying it to frighten voters into supporting him? And do you think his case is consistent or not with his calling a referendum in the first place and with his making backing for continued membership conditional on renegotiating the terms of our membership in the way he has?

Let us know what you think.

John Humphrys is presenter of the Today programme on Radio 4 and Mastermind on BBC1. He has won many national journalism awards and written seven books.