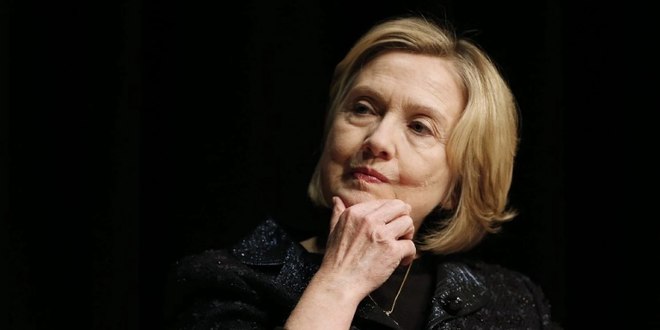 Over a third of Democratic primary voters worry that Hillary Clinton is dishonest, but she is regarded as more capable and experienced

One side in the battle between former Secretary of State Hillary Clinton and Vermont Senator Bernie Sanders for the Democratic presidential nomination appears to have taken an active dislike towards the other, and their opinions have gotten worse.  In the latest Economist/YouGov Poll, a majority of Sanders supporters hold an unfavorable view of Clinton, and more than four in ten say their opinion of her has gotten worse lately.  A third even said they would be “upset” if Clinton won the nomination. 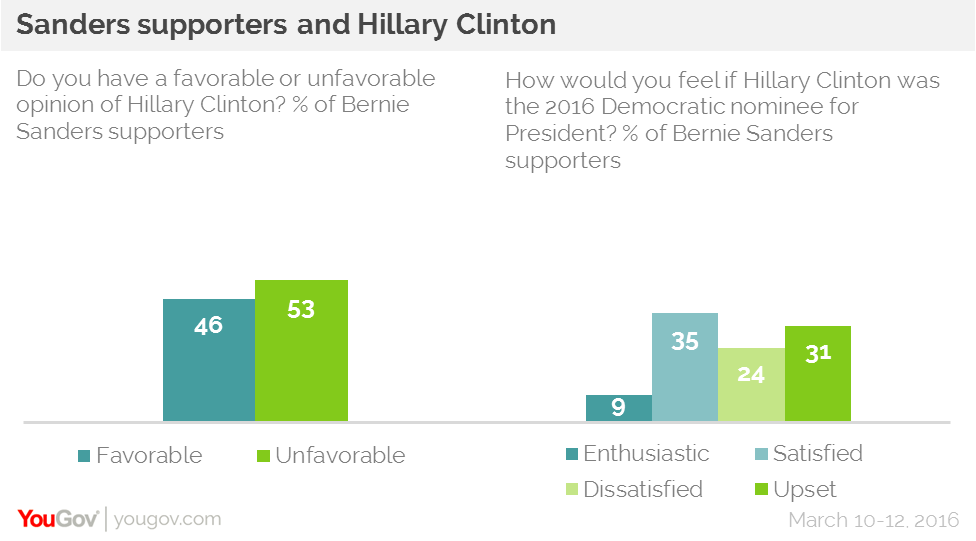 The Economist/YouGov Poll has a larger sample size than most other polls, allowing analysis of both Democratic candidates’ supporters.

This was not a great week for the Clinton campaign.  Sanders’ surprise win in Michigan, though narrow (he won by less than two percentage points and fewer than 20,000 votes) brought momentum to his campaign, and new hope for his supporters.  Sanders could win a few of the races coming on Tuesday.  Clinton continues to lead him among likely primary voters nationwide, though her margin has slipped in the last two weeks. 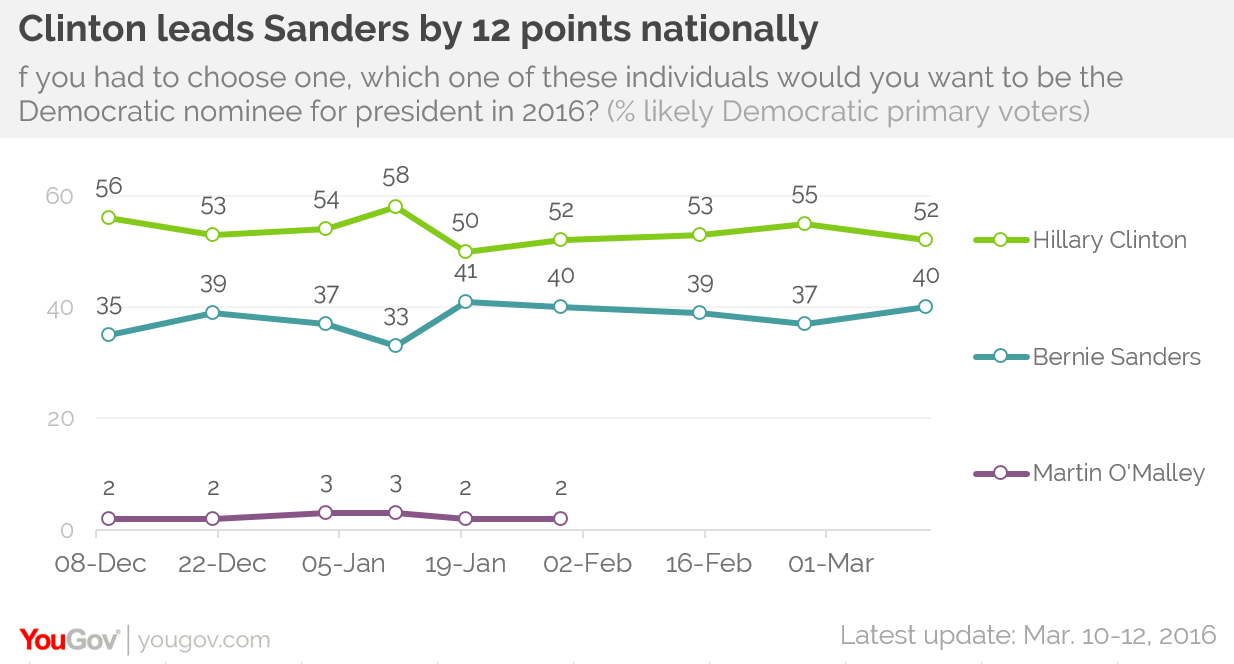 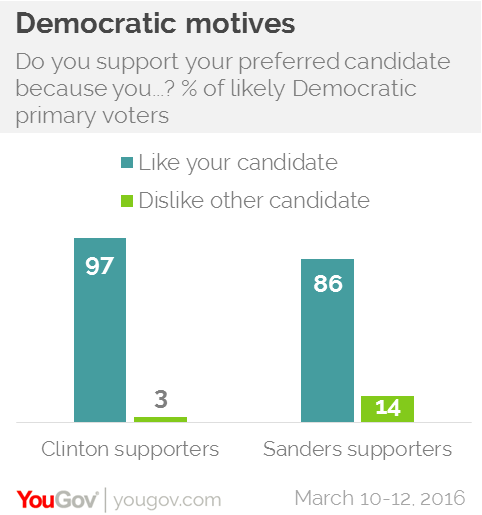 Sanders’ supporters have expressed negative assessments of Clinton for at least the past month, although as of now most of those Sanders voters say they would not desert her in a general election.  Currently, 15% of those favoring Sanders say they would vote for Republican Donald Trump in a possible Clinton-Trump matchup, and an additional one in five say that as of now they haven’t chosen between the two.

Even those Democratic voters who are not supporting Clinton recognize some of her strengths.  She is seen as more electable by all Democratic primary voters, and three in four Sanders supporters believe she could win in a general election.  And while Sanders’ supporters think he would make a better candidate (and a majority believe he will be the nominee), more of them see Clinton as a fall winner than Clinton voters see Sanders as one.

Republican voters, too, see Clinton as a potential winner: 59% of them think she could win in November.  51% of GOP voters think Sanders could never win the general election.

The two remaining Democratic candidates appear, in many ways, as opposite.  Sanders does better than Clinton with Democratic primary voters on characteristics that relate to honesty and authenticity; Clinton with areas that have to do with experience and ability.  More see Clinton as ready to serve as Commander-in-Chief than see Sanders that way (and as has been the case all along, she scores best on this characteristic with the public overall, better than any of the Republican candidates). 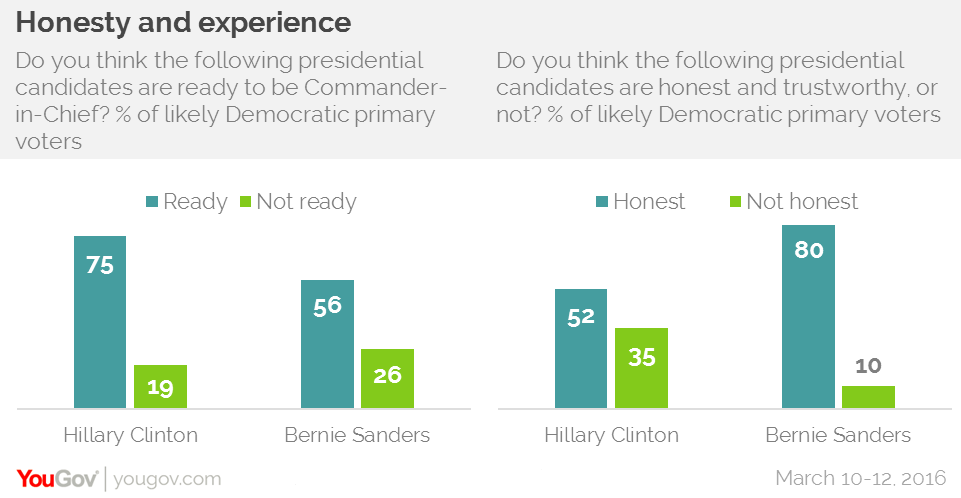 More Democratic primary voters say Sanders cares about their own needs and problems, mostly because Sanders supporters give Clinton a negative assessment on this.  Only 37% of Sanders supporters think Clinton cares about their needs and problems; compared with the 77% of Clinton voters who give Sanders a positive evaluation.  But when it comes to which candidate is best for blacks, women, working people, LGBT people, and “people like you,” Clinton loses to Sanders among Democratic voters only when it comes to working people.  Very few Democratic primary voters chose a Republican candidate on these questions.

While Sanders supporters may not like Hillary Clinton, they still like her husband. But just not quite as much as Democratic primary voters in general.   Six in ten Sanders supporters have a favorable view of Bill Clinton.  And the public overall likes him too. 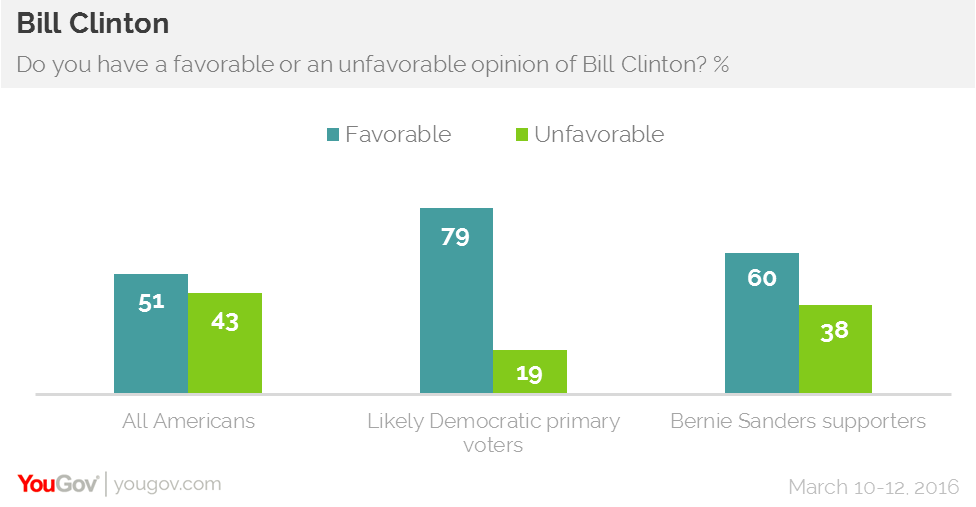 Full poll results can be found here and topline results and margin of error here.