YouGov research from 24 countries reveals where the genders are considered most and least equal and the connection to wealth. The Nordic countries generally outperform the rest of the world when it comes to attitudes to gender

The facts on gender inequality from around the world are stark. Women earn 33% less than men and are concentrated in jobs with poor working conditions; 700 million women are victims of physical and/or sexual violence each year, often in close relationships; men own and manage just under 70% of all businesses and women sit on only 19% of board seats globally; and two thirds of the 774 million illiterate adults worldwide are female.

The facts paints a clear picture of continuing gender inequality worldwide, but changes in attitudes reveal the economic and social progress that is slowly being made. For the first time YouGov has collated public opinion data on gender equality from 24 countries worldwide, revealing the countries with the most progressive attitudes to gender equality and where the challenge is most acute.

We asked 14 questions in total – 10 of which are statements about gender equality requiring an agree/disagree response. Four represent views about gender roles that would be considered conservative, such as 'it is unattractive for women to express strong opinions in public', and six represent views that would be considered progressive in relation to the conservative statements, such as 'creating more opportunity for women should be one of the world's top concerns' and 'women and men should generally get equal pay'.

The ranking below is based on an aggregation of the net responses to all ten statements for each country. The Nordic countries generally outperform the rest of the world, which is no coincidence – in the World Economic Forum's Global Gender Gap Index, which measures gender inequalities in health, education, economics and politics, the Nordic countries have the highest levels of equality worldwide. 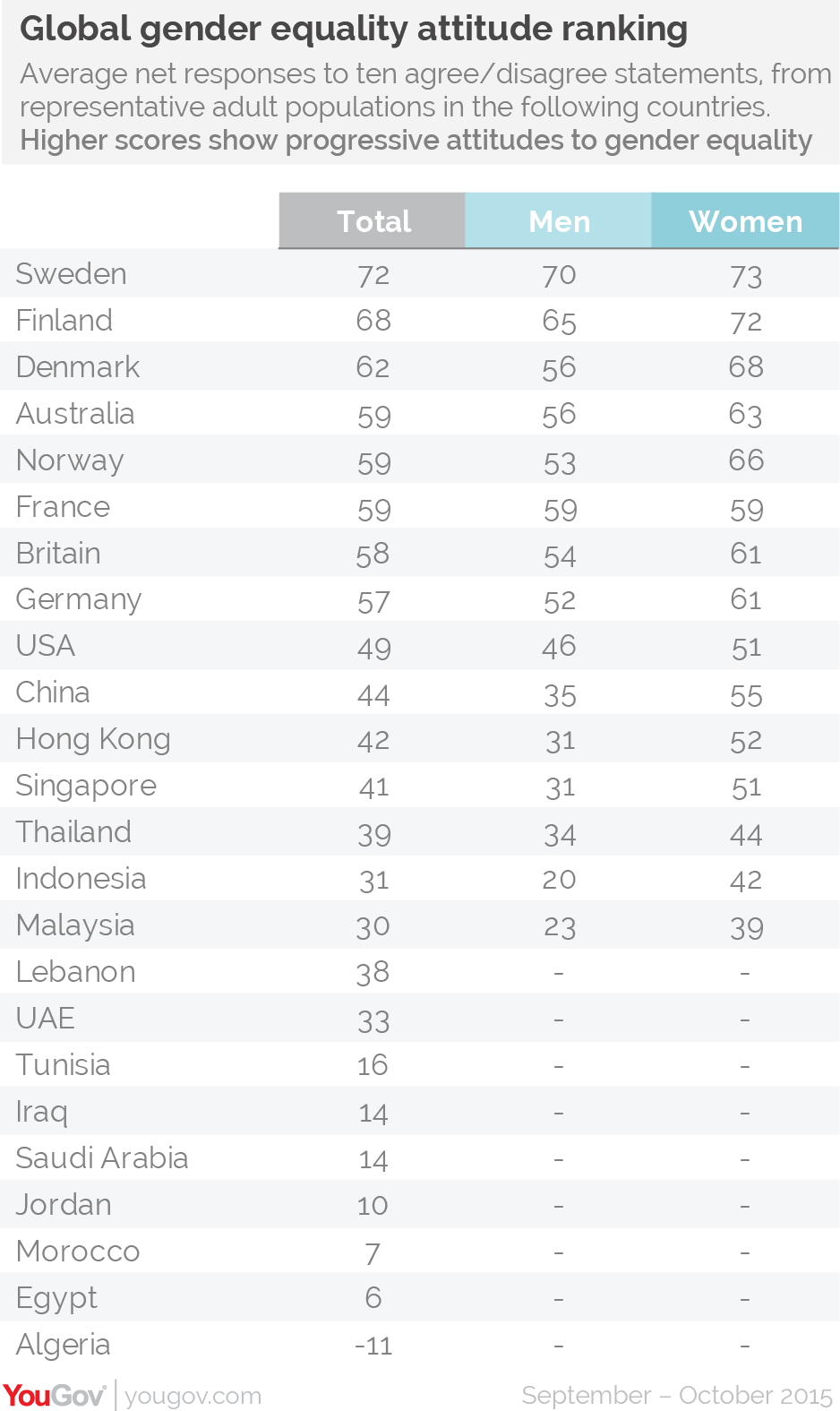 Not only do Swedish people have the most progressive attitudes to gender equality worldwide, there is virtually no gap between the views of men and women. In Asian countries like China, Hong Kong and Singapore there is a 20-21 point difference between male and female attitudes. Due to smaller sample sizes in the Middle Eastern countries data for individual genders is unavailable. 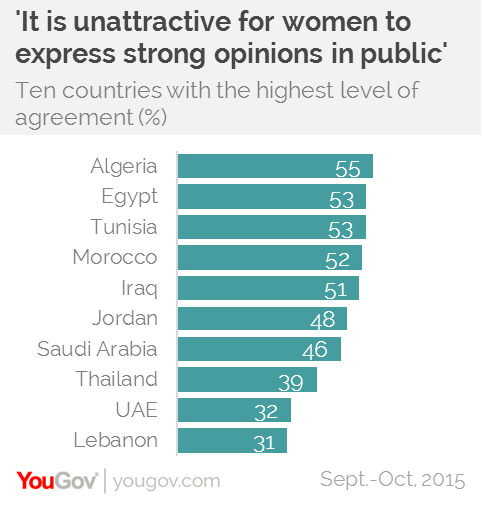 Britain misses out on the top quartile by one point, placing with Germany at the tail end of the European countries but 9 points ahead of the remaining Western nation – the US.

The Middle Eastern nations are the most conservative, and on three statements there is more than a 60 point difference between the Middle East average and global average – 'a wife's first role is to look after her husband' (on average 74% agree in the Middle East), 'a woman's place is in the home' (54%) and 'it is unattractive for women to express strong opinions in public' (48%).

As can be seen in the chart below, there is a significant relationships between a country's attitude to gender equality and its GDP per capita. But there are notable exceptions – most obviously in the US. America has over seven times as much wealth per person as China, however it scores only five points higher in progressiveness.

Relationship between GDP per capita and net progressive attitudes to gender equality on ten agree/disagree statements. Hover over datapoints to explore

Saudi Arabia has considerably more wealth than many countries with similarly conservative outlooks, while relative to their low levels of GDP per person, China, Thailand and Lebanon are highly progressive.