When Vice President Joe Biden announced last week he would not run for president in 2016, he gave former Senator and Secretary of State Hillary Clinton what appears to be a present: her lead over Vermont Senator Bernie Sanders widened.  Two weeks ago, in the Economist/YouGov Poll, just under half of registered voters who think of themselves as Democrats favored Clinton for the nomination, this week, more than six in ten choose her.  Clinton’s margin over Sanders jumped ten points.

Sanders’ support increased very little:  the percentage of Democrats choosing him rose just three points.  Sanders does best with those under 30, who are closely divided (47% favor Clinton, 41% Sanders). But he still has not managed to gain much support from minority Democrats: African-Americans support Clinton 77% to 14% for Sanders (however, it should be noted that early in the 2008 campaign, Clinton led President Obama as the presidential choice of African-Americans.  That changed dramatically during the campaign).  Clinton leads with both men and women – she is 24 points ahead among men, and ahead by 38 points with women.  She also leads with would could be Sanders’ natural constituency - Democratic liberals. 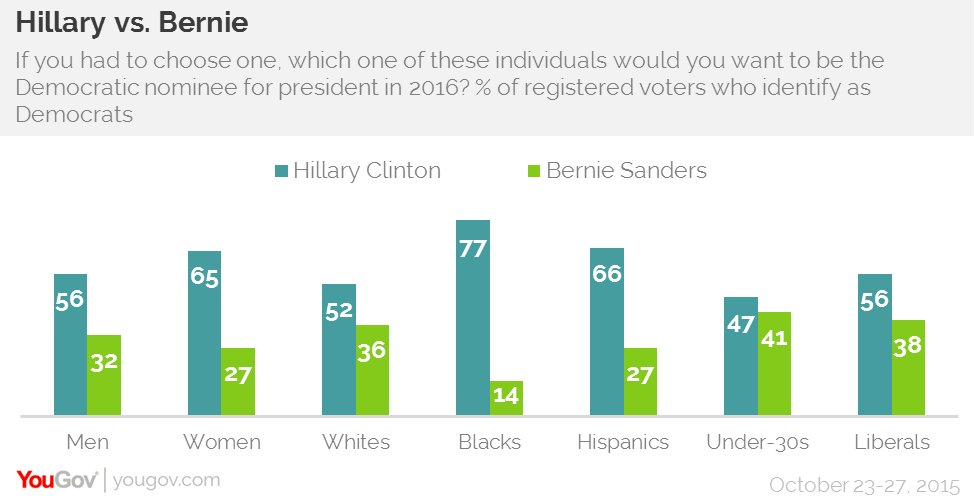 Adding in those who have a second choice, 83% of Democrats like Clinton as their first or second choice; 57% pick Sanders.

Just about half of Clinton’s supporters name Sanders as their second choice; 67% of Sanders supporters choose Clinton second.  Most of the others say that at this point, they aren’t sure whom they would support if their favored candidate left the race.  And there is some desire for more competition: among all Democrats, 29% would like someone else to enter the race, nearly twice as many as the 16% of Republican voters who want to increase their (current) 15-person field.

Clinton remains the candidate most think will become the Democratic nominee, and far more people – both Democrats and non-Democrats – believe she could win the November election than believe Sanders could. 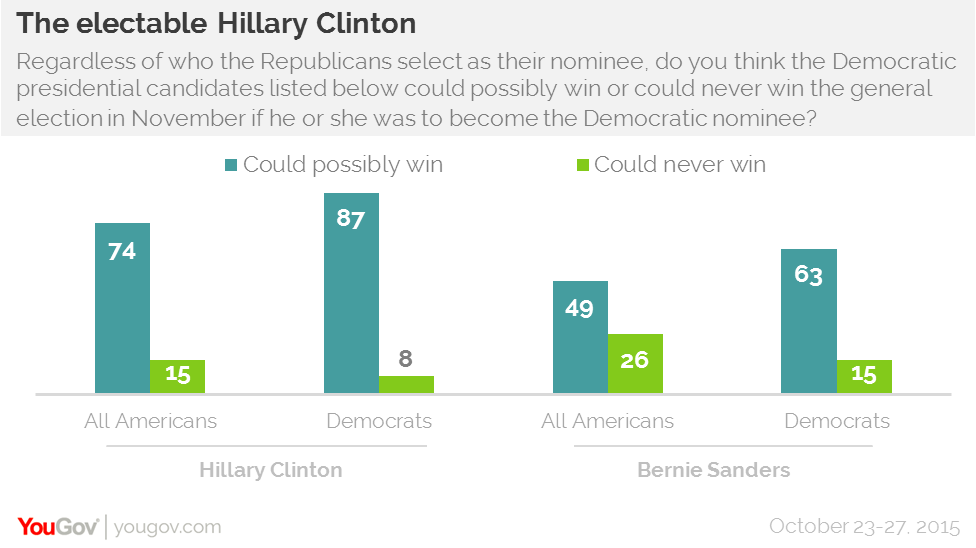 However, not all is rosy for Clinton.  This poll was conducted after the marathon Congressional hearing on the 2012 attack on the American consulate in Benghazi.  Clinton testified for 11 hours at that hearing.  But the poll suggests that Clinton may still have convincing to do about her role during that attack, as well as her use of a private email server when she was Secretary of State.

There was almost no change before and after the hearings in how the public viewed Clinton’s performance as Secretary of State.  Approval of her handling of Benghazi rose only marginally.  And although slightly more this week than before the hearings believe those hearings are politically motivated, much of that increase took place among Democrats.  This week, 61% of Democrats look on the Congressional investigation as mostly a politically-motivated attempt to embarrass the Administration and Clinton.  50% of them thought so two weeks ago. 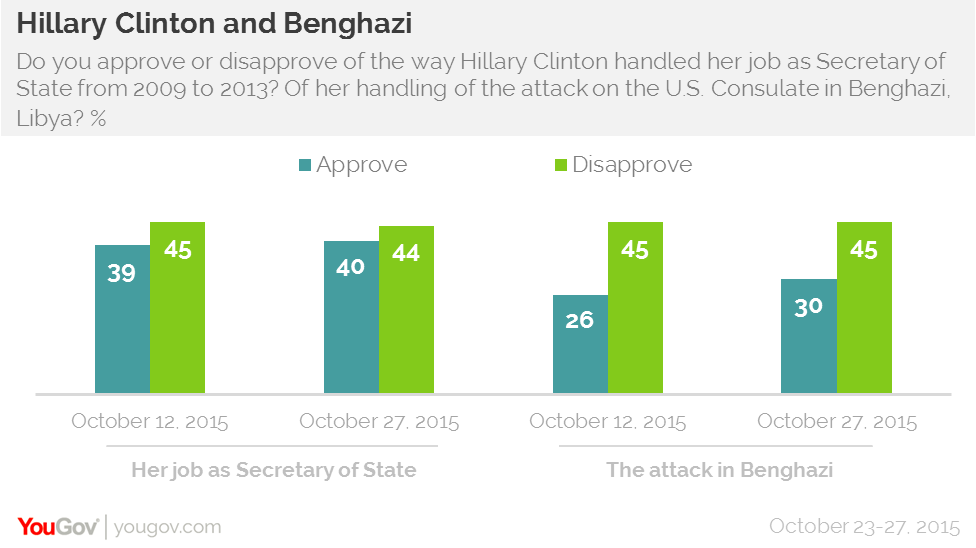 Perception of Clinton’s overall honesty remains a problem, too.  Just 31% overall (and 61% of Democrats) say she is honest and trustworthy, not much different from what Americans thought two months ago.  More than half say her use of a private email server is a serious concern, and 43% -- as many as two months ago – believe her use of that server broke the law.   Party identification has a major impact on how people view all of these issues.