We need more time in bed in the winter and are more likely to get ill. We also drink more in the run up to Christmas, exacerbating both of those things. This makes it harder to get out of bed, and more tempting to call in sick, exaggerate our sickness or make up some other lie to get out of going to work in the morning. It’s hard to estimate the impact of sickies on the economy, but it would be in the billions – one analysis suggests the cost in lost productivity of 375,000 sickies on February 2 was £34 million. 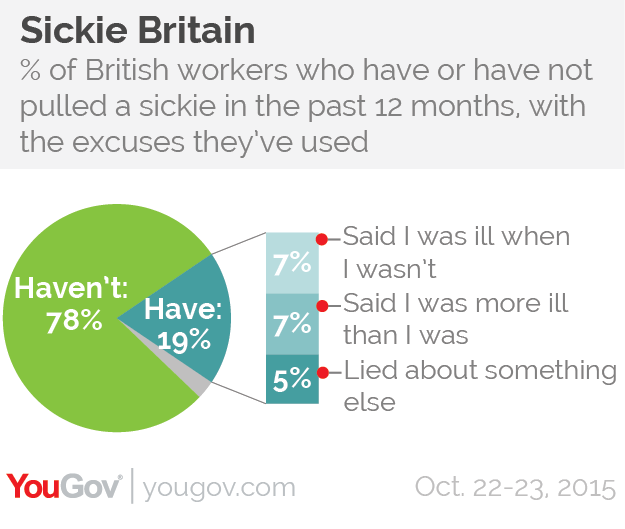 According to new YouGov research, that cost may be even more startling. 19% of British workers – around 9 million people – have pulled a sickie in the past 12 months, either by making up an excuse about being ill when they weren’t (7%), saying they were more ill than they were to avoid going in (7%) or making up some other kind of excuse that was untrue (5%).

5% of the British workforce admit to not going into work just because they were hungover, or 11% of 18-24 year olds.

There is a presumption that British people are less hard working than Americans, but research by YouGov in the US reveals an even higher incidence of sickies there – 26% of American workers have lied to avoid going in to work in the past 12 months. Americans receive far fewer holiday days on average however, so their absences may be more understandable.

Before mobiles, if you decided you couldn’t fulfil a social engagement there was no way of dropping out at the last minute, short of actually leaving the person alone in the pub. Now it’s so easy to tell someone a few hours before that you can’t make it, and chances are they can send a quick message to find someone else to meet up with.

There is a huge gap between young and old people’s record of honouring their word with social engagements. Fully 63% of 18-24s have pulled out of meeting up with friends or family in the past 12 months, either by saying they were ill when they weren’t (29%), exaggerating their illness (18%), going to something else they probably could have avoided (18%) or making up some other kind of excuse that was untrue (47%). Only 20% of over-60s have done the same.

Of course many young people have busier social lives, but when asked about their whole lives the same pattern emerges. 72% of 18-24s have ever ‘flaked’ out of a social engagement, compared to only 31% of over 60s.

People who live in London, often complaining about being busy, are also significantly more likely (61%) than average (47%) to say they have ever avoided a social engagement in a potentially deceitful way.