Angela Merkel’s tough line on Greece during the ongoing debt crisis has reawakened images of ‘cruel Germany’, interrupting a hard-fought reputation for postwar diplomacy. As negotiations between Greece and its creditors reached breaking point, critics of Germany’s stance circulated a 1953 picture of Europe agreeing to effectively cut the country’s debt in half. On social media the phrase ‘this is a coup’ became popular.

New YouGov research across seven European countries finds only Denmark, Sweden and Norway tend to say that Germany has handled the crisis well on balance. British people are the most scathing – 50% say Germany handled the events badly, 21% say well – and a majority of Germans (51%) disapprove of their government’s response.

These ratings are still better than those given for the handling of the crisis by the IMF, Greece and Eurozone leaders in general, however. And in Germany criticism may come from parts of society where the country’s stance is viewed as too lenient, as well as those where it is viewed as too harsh. 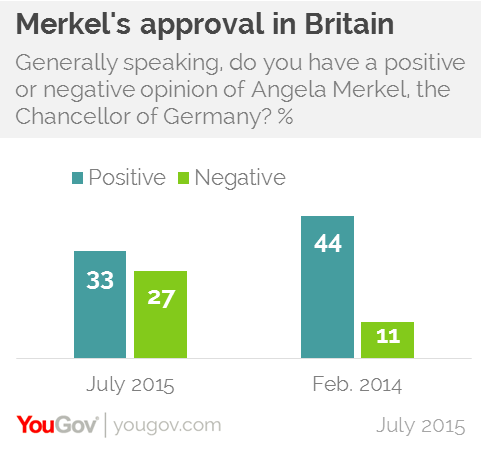 In Britain, where the left-wing have been sympathetic to Greece’s ruling Syriza party, Labour voters are more critical of the government’s handling of the crisis (a -33 net rating compared to Conservatives’ net -22).

Angela Merkel’s approval has also suffered in Britain. In February 2014 44% viewed her positively and 11% negatively – now those scores are down to 33% positive and 27% negative. Again approval is lower among Labour voters (+4) than Conservatives (+16).

Although fears of Greece leaving the Eurozone have been temporarily averted following a deal struck with creditors last month, instability prevails and infighting over the deal’s conditions could still result in prime minister Alexis Tsipras calling an early election.

As the reality of a Greek exit set in the German public cooled to the idea, however since the deal was reached a majority have again come round to it, with 58% preferring Greece to leave the Eurozone and 31% in support of their continued membership. But even more so than last month, most Germans (57%) doubt this will happen. 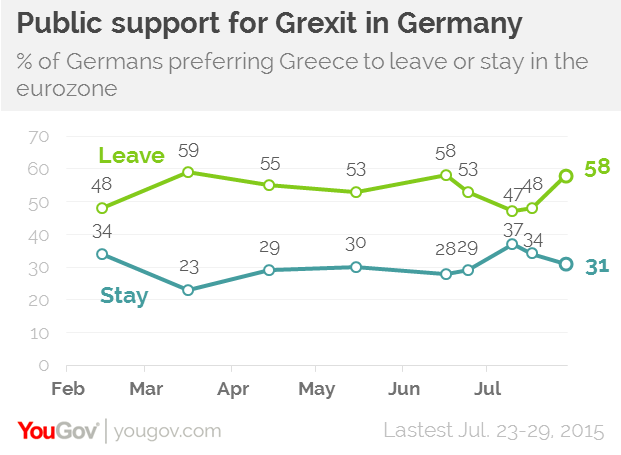 Greek shares nosedived yesterday, as markets opened for the first time in five weeks. The main Athens stock index dropped 16.23% by the end of the day – the biggest one-day fall of the US Dow Jones was 22.61% on 1987’s ‘Black Monday’. Greek manufacturing also sunk to its lowest level on record.